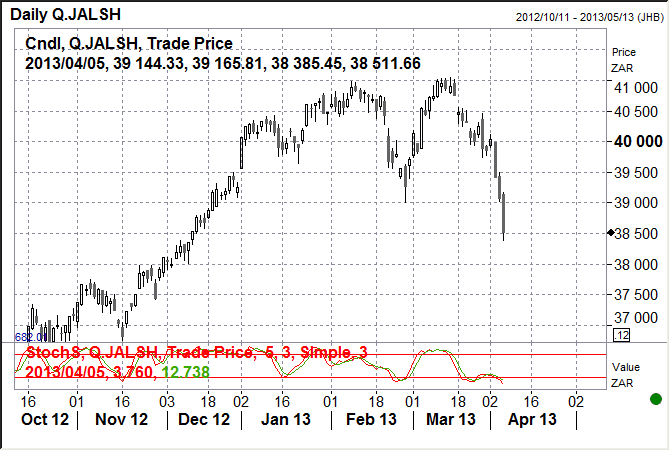 This correction was long overdue. Since the time I wrote this post, mentioning in it that

Looking abroad, the BOE, BOJ and SNB have all upped the ante with more QE, and once the ECB joins in by purchasing assets without sterilising these purchases, all the major central banks of the world will be engaged in substantial monetary loosening. This is where one wants to be long commodities and equities, and short core G4 bonds, but long junk bonds and European periphery debt once again. The wave of monetary inflation we have been waiting for is upon us, and it is time to position accordingly.

The Alsi rallied 20% since writing the above and peaked between between March 15-18. However, following big upswings like this you can expect some downswings too. That is why on March 18, I wrote to clients in The Investor Weekly that:

News over the weekend that Cyprus bank depositor’s will lose up to 10% of their deposits in the banking system has set asset markets up for a nosedive this week.

The JSE Alsi is technically set for another correction to the downside as the index topped out at prior highs also seen in February 2012 just below the 41,000 points mark last week.

In the short-term, downside risks have escalated for the Alsi. The Alsi has rallied hard in recent months, and as a result the index is looking relatively expensive. We would favour a medium-term consolidation of the index off currently overbought levels before adding to a long Alsi exposure.

This is the correction of the JSE that is necessary to restore the market to health. It had run too hard too fast, and must now correct. However, following this correction, the trend should resume to the upside. If you’re a long-term investor, don’t try to trade these swings, you will come short, and you will lose your long position and may be forced to buy back into the rally at a higher price. To be one of the first to get these strategies and insights, subscribe to The Investor Weekly report.