The share price of African Bank Investments Limited (Abil) is crashing following the announcement that nearly a third of the loans on its loan book are non-performing (meaning people are defaulting on their loans or struggling to repay them). The share price has nearly halved since the start of the year, and is down 21.65% today alone. 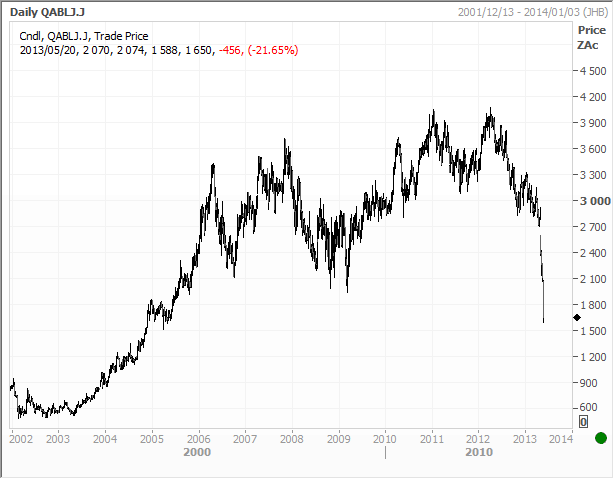 This has been a long time coming. By keeping interest rates lower than they should be – where the supply of real savings match real demand for money capital – the Reserve Bank has created this imbalance of credit supply in the economy.

Coming out of the global financial crisis, the middle- to high income market was saturated with debt, but the low income market was not. As the SARB lowered interest rates by pumping new money into the banking system, it gave banks freshly printed money to lend. Abil (and Capitec) were well placed to aggressively go after the low income unbanked market, which is exactly what they did. The SARB tried to stimulate general economic activity, but instead over-stimulated activity in the unsecured subprime credit market.

More than two years ago in March 2011 I wrote to ETM Analytics clients in a pretty detailed credit market report that [emphasis as in original]:

Within the household credit category, a breakdown shows that “general loans” have risen by just over 50% over the past two years. General loans are mainly personal loans – uncollateralised lending at a premium. The share of general loans as a percent of total household debt has risen from 3.7% in Jan 2009 to 5.4% in Jan 2011.

Under current economic and employment conditions, it is hard to conceive of this increase in personal loans being anything other than household finances being under stress and some expenditures being funded with borrowed money. With the housing market having stalled and home equity withdrawals disappearing as a result, it could mean that households are tapping personal loans to maintain a certain lifestyle and spending habits.

However, the most likely driver here is borrowing by low income earners. A random sample of two established banks and two banks catering more to the lower income segment of the market suggests exactly this.

Absa Bank and Firstrand Group extended personal loans at an average monthly rate of 1.6% and 2% respectively over the six months from July to December 2010. Capitec and African Bank, on the other hand, pushed personal loans to the tune of an average monthly increase of 5.7% and 6.3% over the same period, respectively1. Low income earners are having credit thrown at them, and this is something to bear in mind as it may lead to a category of subprime borrowers in SA that result in a sharp spike in NPLs for these banks in the future.

The original report can be read here. This trend continued until mid-2012, when the credit environment started to change materially, and these short-term loans are now starting to go bad, very bad, judging by Abil’s statement released today.

Although most analysts will say the potential fallout from the unraveling of this unsecured credit market will be small as it is restricted to Abil, I am warning that it could be bigger, and will be likely to ripple through to other banks and then all credit providers serving lower income groups – unless the SARB intervenes.

The SARB will be under a lot of pressure to cut interest rates as this bubble bursts in an attempt to keep the credit structure propped up. A full analysis and insight of the subprime market unraveling, and what this means for the Rand, monetary policy, and various sectors in the economy will be sent to ETM Analytics clients in the Business Cycle Monitor this week.