The data comes from the ETM Analytics household price index, where we’ve been tracking a basket of 20 items at four major retailers in the Fourways area of Johannesburg. The infographic was compiled by Grafika24 and published in a Beeld article here.

For foreign readers who don’t understand Afrikaans, following the link below you’ll find a list of translations of the items, in descending order from highest inflation to lowest.

END_OF_DOCUMENT_TOKEN_TO_BE_REPLACED

Earlier this week, Statistics SA announced in the CPI release that food prices climbed 3.5% in December from a year ago. According to prices that we track at ETM Analytics at four major retailers in the Fourways area of northern Johannesburg, food prices have climbed around 13% annualised since March last year.

I don’t know what Stats SA is doing with prices that they collect and go into their models, but it sure looks very different to what I’m seeing.

I spoke to Bruce Whitfield about ETM Analytics’ household price index inflation that has climbed by 9.2% from March 2013 to November 2013, an annualised rate of increase of 12.4%. This compares with the ‘official’ inflation rate of 5.5% year-on-year in October 2013. (I come in at around the 27 minute mark).

END_OF_DOCUMENT_TOKEN_TO_BE_REPLACED

Watch both and listen carefully to the commentaries of two very big names in the world of investing and asset management. In particular their comments on the insanity of continuing with QE at the current pace, who benefits the most from this (the wealthy such as them), and the inevitable major collapse this sets the market up for.

Watch this clip from 8 minutes in if you can.

The platinum price in rand terms has risen just over 30% from a year ago, but despite that, Anglo American Platinum announced it will lay off 7,000 workers from its South African operations. This indicates just how much the company’s cost base has risen over a similar period to force it into such a major cost cutting exercise. Remains a long-term bearish story for mining in SA, and for the overall economy. 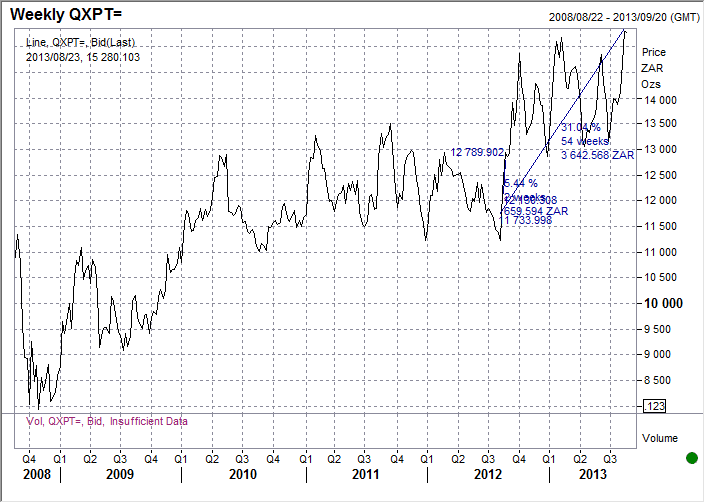 Or just listen to Russell’s interview below.

China consumed 706.36 tonnes of gold in the first half of 2013, up 54% from the year-ago period, the China Gold Association (CGA) said in a statement on its website on Monday…

“China’s demand in April and May was unmatched,” said one Shanghai-based trader. “They bought more than anyone and were consistent buyers even after prices recovered a little.”

This is despite all indicators showing Chinese economic growth is slowing down.

I speculated in April that “Physical gold continues to be taken out of the market as individuals in the know use current low prices to stockpile. All the while hedge funds and speculators – and possibly even central banks – are driving the price lower. This is a great opportunity to accumulate physical gold as one day when the currency and banking crisis hits one of the major economies (Germany/UK/US/Japan/etc), there won’t be any physical gold available for sale. This is Gresham’s Law in action. Bad, overvalued, paper money is driving out good, undervalued, gold money. Once the general public catches on to what’s going on here even a marginal increase in physical gold demand will cause shortages to develop and this will cause the gold price to climb much sharper than it has in any point in the past decade.”

I also pointed out a week later that the US Mint ran out of American Eagle gold coin supplies, and that demand for Krugerrands had skyrocketed at FNB Share Investing following the dip in the gold price. This video of Rick Harrison saying he can’t get hold of physical gold in the US tells the same story.

One needs to understand that gold is an alternative currency in competition with the rand and dollar that cannot be printed at will by the billions by central banks. In the current world of severe monetary instability, it is a prudent strategy to continue to accumulate a portion of one’s savings in physical gold. One day there will be no physical gold available for sale at any price, and this is going to force the hedge fund and other speculative community to become major buyers, and will launch the gold price into the stratosphere. Make sure you get your share of gold before we get to that point. The current gold price decline is a huge gift to those who understand what lies ahead for the gold market.

“may be an indication that the rand has gotten a little undervalued following the recent bout of weakness. It may also indicate that SA prices are set to ratchet sharply higher from here. Or that we will experience a combination of rand strength and accelerating inflation in coming quarters.”

On Saturday Alec Hogg tweeted that Investec bank charges are nearly 75% cheaper in SA than in the UK.

I again pointed out SA is cheap on a PPP basis. For these prices to equilibrate to some degree, SA prices could rise, UK prices could fall, or the pound could weaken and the rand strengthen (or a combination of all four). Now note Keith McLachlan just tweeted that

This happens to coincide with my expectation that SA price inflation is set to accelerate at the consumer level. What’s also interesting about it is that the rate that Investec has put its prices up has kept track with the near 18% y/y increase in the JSE All share index. Is SA about to see sharply accelerating price inflation from here?

The following chart is from Ronald-Peter Stoeferle of Incrementum Advisor’s “In Gold We Trust 2013” report. 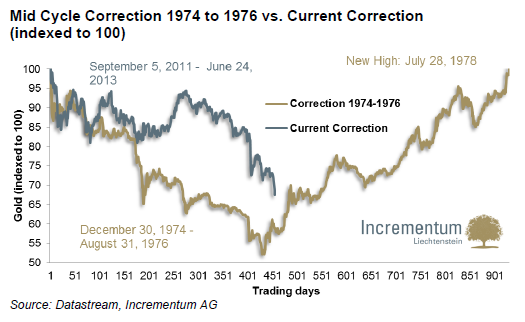 As Peter Schiff pointed out about the current gold correction:

The New York Times had the definitive take on the vicious sell off in gold. To summarize one of their articles:

“Two years ago gold bugs ran wild as the price of gold rose nearly six times. But since cresting two years ago it has steadily declined, almost by half, putting the gold bugs in flight.  The most recent advisory from a leading Wall Street firm suggests that the price will continue to drift downward, and may ultimately settle 40% below current levels.

The rout says a lot about consumer confidence in the worldwide recovery. The sharply reduced rates of inflation combined with resurgence of other, more economically productive investments, such as stocks, real estate, and bank savings have combined to eliminate gold’s allure.

Although the American economy has reduced its rapid rate of recovery, it is still on a firm expansionary course. The fear that dominated two years ago has largely vanished, replaced by a recovery that has turned the gold speculators’ dreams into a nightmare.”

This analysis provides a good representation of the current conventional wisdom. The only twist here is that the article from which this summary is derived appeared in the August 29, 1976 edition of The New York Times. At that time gold was preparing to embark on an historic rally that would push it up more than 700% a little over three years later. Is it possible that the history is about to repeat itself?

DirectAxis has created this interesting infographic on the SA petrol price. What they under emphasize is the huge impact that the weakening rand has on the fuel price (and all other prices) over time. The weakening of the rand and the US dollar together are the most important reason for the long-term trend of rising fuel prices. If your salary is not rising faster than the petrol price, it means you are far removed from the central bank’s printing press.

CLICK ON THE IMAGE TO SEE THE FULL INFOGRAPHIC 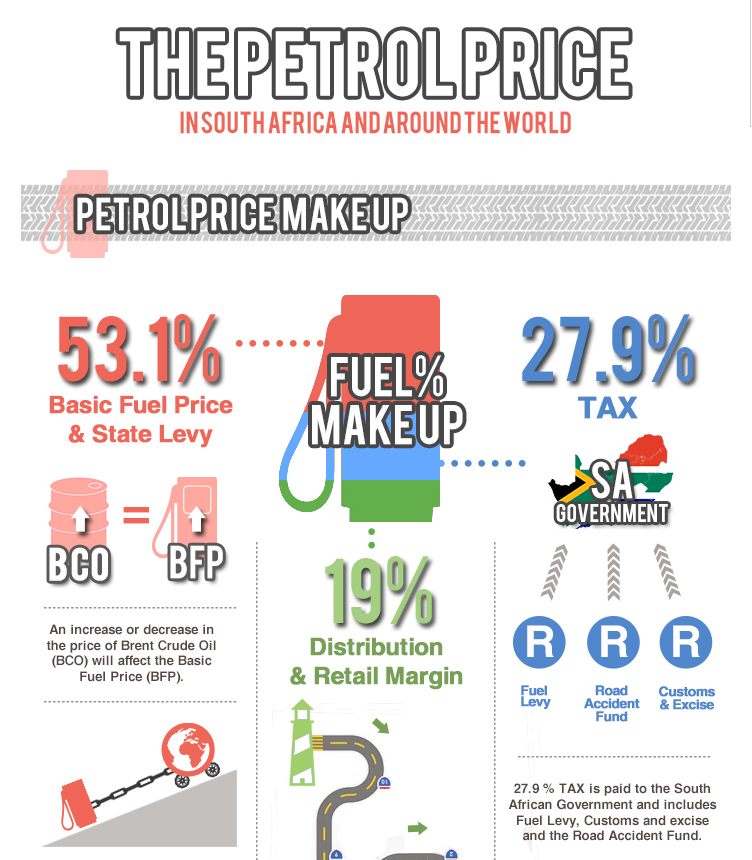