As long as government doesn’t take the opportunity of a collapsing oil price to pass-through a fuel levy to cover eTolls and bail out Sanral (don’t share the idea with them), petrol prices may be heading back to levels last seen in 2012. That means a price of around R10 a liter for 95 ULP petrol in Gauteng could be on the cards. 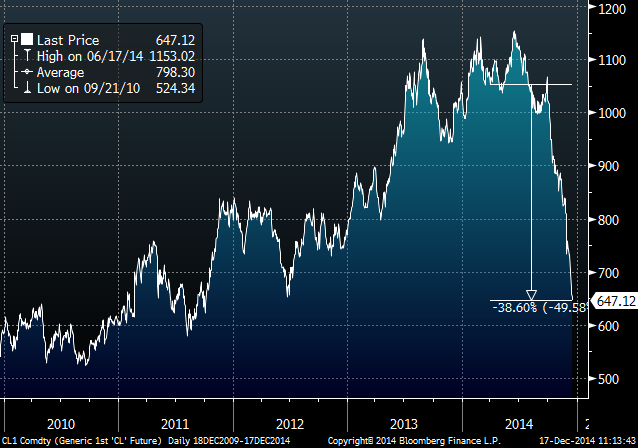 And the pump-price follows this global oil price pretty closely, although is less volatile, because it is regulated. As things stand there’s around a R1 per liter price decline coming in January. 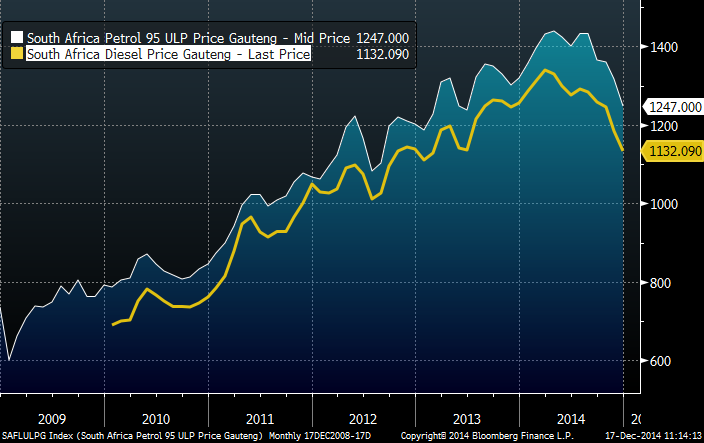 Lower CPI inflation, cheaper to run your and Eskom’s generators, and likely to keep the Reserve Bank in a friendly mood with unchanged interest rates for longer.

According to the latest statistics from the Central Energy Fund, consumers could be in for another shock with the petrol price rising again by 37 cents a litre, bringing it to just over R12/litre, TimesLive reported yesterday.

If the Reserve Bank stopped its policy of creating price inflation by keeping the exchange ratio of the Rand lower than it otherwise would be (by cutting interest rates and increasing Rand money supply), the petrol price would today be nearer to R3 per liter than R12.

But you can relax dear readers, a friend tells us that what we should really be focusing on are “real” prices, and that because employee compensation is up more than petrol price increases, you are (actually) better off than before.