The army stuck to its promise and yesterday removed the Egyptian president from office for failure to deal with their demands.

US president Barack Obama, who sends around $1.5 billion to the army in military support to Egypt each year, issued a statement from the White House that completely avoided calling this a “coup”, as that would legally mean he must stop sending financial and military aid to the Egyptian army.

It is worth revisiting what Eric Margolis wrote about Egypt a year ago:

Egypt’s new parliament must now face the difficult task of naming a 100-member panel to draft a new constitution to then be validated by a national referendum.

Even if parliament achieves this goal, it will then  confront Egypt’s 500,000-man military and equally numerous internal security forces.  So far, Egypt’s military, which is financed, armed and sustained by Washington, threw dictator Mubarak to the wolves to appease popular anger but  has barely given an inch on other key issues.

A year after the Tahrir Square revolution,  Egypt remains a brutal police state where regime critics  disappear, are tortured, and jailed in the thousands.  The old guard still control much of the nation’s media, academia, courts and industry: Mubarakism without Mubarak.

The US-backed generals own between a third and two thirds of Egypt’s key businesses or real estate and enjoy lavish perks.

The military’s senior military officers have been trained by the US, vetted by CIA, and  are joined at the hip to the Pentagon in much the same manner as were Latin America’s generals in the 60’s and 70’s.

Washington gives Egypt’s military $1.3 billion annually, controls its flow of weapons and spare parts, and provides tens of millions in “black payments” to the military, security forces, and intelligence service, the “Mukhabarat.”

Accordingly, it’s difficult to see Egypt’s plutocratic military easily giving up all of its political and economic power to a rowdy civilian parliament, particularly when the US, Britain, Saudi Arabia, France, and Israel are all quietly backing the military regime.

If the military cracks down on parliamentary forces, it risks driving the opposition underground and more violence.   Egypt’s military may split, as younger, Nasserite-officers try to seize power, or face bloody urban guerilla war.

Washington would be wise to press its allies in the military to quickly cede power to a responsible civilian government.

Washington did not press its ally – the Egyptian military – to cede power but kept funding them and yesterday the coup came. So much for the US bringing democracy to the rest of the world, eh?

For more background on what’s going on in Egypt, read Margolis. 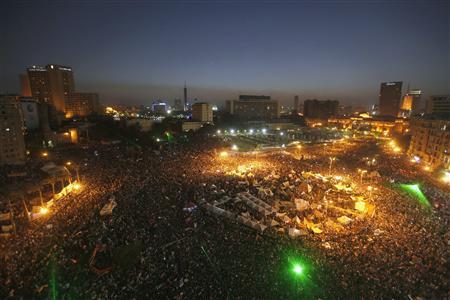 In October 2012 I published research for ETM Analytics clients that found Turkey and Brazil to be at the most risk of widespread social unrest in coming months. We know where those countries are today.

Ciaran Ryan wrote an article on the research findings that was published on LewRockwell.com in December, where he wrote based on my findings that:

Today Turkey and Brazil are burning, and Ciaran published an update to that article, featuring more of my insight and analysis to what’s going on in these countries, here.