In March 2013, the same liter of petrol may climb above R13 for the first time ever. The fuel price could rise by more than 80 cents when it is announced next week.

That’s a price inflation rate of 634% since the end of Apartheid. This is what that price trend looks like, in graph format. 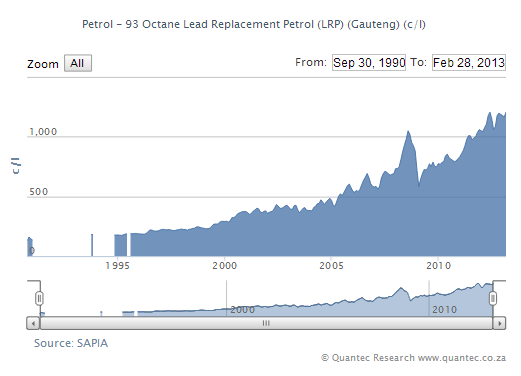 What is so interesting about this that it is worth commenting on? Well, has your salary increased that much since 1994? What do you think this does to people in retirement who saved Rands from the 1950s to the early 1990s? What impact does this rising fuel price have on unemployed or poor people?

Below is a chart of how the post-Apartheid Reserve Bank has increased the money supply. Compare this chart with the petrol price above; Note how it follows the same trend as the petrol price. 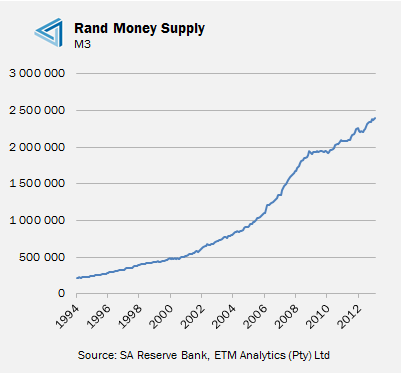 The Reserve Bank has increased the money supply by more than 1,000% since 1994. It is  a miracle that the price of fuel has not risen even more, or that price inflation has not accelerated dramatically in the economy. One reason this has not happened is because foreigners have been willing to invest in South Africa since the end of Apartheid. As I wrote the other day, there are signs that this trend of investment will soon start to reverse. Once this happens the tide will pull out and price inflation will break out like a serious Joburg hailstorm all over the country, in the prices of all goods and services.