Basically, a man was murdered by police for resisting arrest. IOL news reports that:

The 27-year-old man, a Mozambican national, was found dead in police cells by a police officer on Tuesday night.

Dlamini said earlier on that day the man’s taxi was allegedly obstructing traffic in Empilweni Street in Daveyton. Two policemen, a Warrant Officer and a Constable, saw the vehicle and switched on their siren, trying to tell him to move the vehicle.

“It is also alleged that the taxi driver then assaulted the Constable and took his police firearm.

“The Warrant Officer overpowered the taxi driver and handed the firearm back to his colleague,” he said.

The Warrant Officer then drove to Daveyton police station in a taxi to call for backup.

“When back-up arrived the Constable was still at the scene, struggling to put the suspect in the police van.”

He said officers managed to put the “resisting suspect” into the police van and took him to the police cells.

He was found dead by another police officer later in the day.

Dlamini said a post mortem was received on Wednesday and it indicated that the cause of death was head injuries with internal bleeding.

“They (policemen) are only saying they locked him (up) and he was found by another police officer, but we are investigating.”

This was done by the government police – the people who are supposedly employed with your tax money to keep the public safe – and prevent murders from happening.

Watch the video submitted by E-news by witnesses. Warning: not for sensitive viewers. 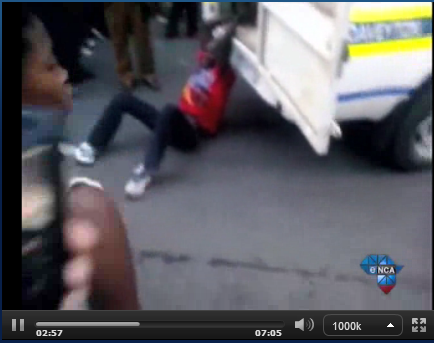 UPDATE: Witnesses dispute the claim that the murdered took a policeman’s firearm away from him. According to the witness, he was trying to get his driver’s license back, reports News24.com.